Users, including users with visual disabilities, must be able to perceive content on the page. Color cannot be used as the only visual means of conveying information, indicating an action, prompting a response, or distinguishing a visual element. Sufficient contrast must exist between the text and background.

Hex Color: This is a “hexadecimal” format where the red/green/blue values are presented as a combination of six letters or numbers. Typically called “Hex,” this is a very common format in webpages.

RGB Color: The amount of red, green, and blue that form a color are each presented as a number between 0 and 255.

HSL Color: Hue, saturation, and lightness map more closely to the way people perceive colors. Changing the “lightness” of a color will change its contrast ratio to another color.

The visual presentation of text and images of text must have a minimum contrast ratio of at least 4.5:1 when measured by a color checker (see below). 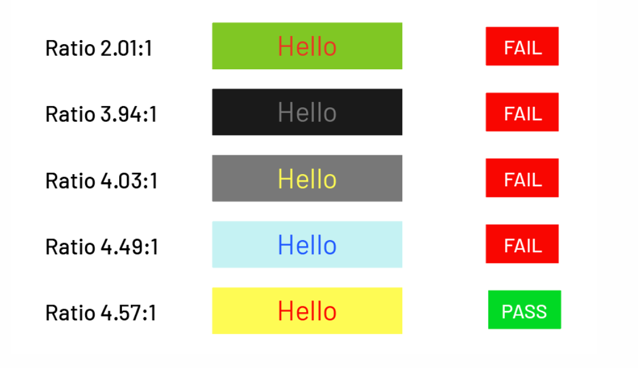 Incidental:         Text or images of text that are part of an inactive user interface component, that are pure decoration, that are not visible to anyone, or that are part of a picture that contains significant other visual content, have no contrast requirement.

Logotypes:        Text that is part of a logo or brand name has no contrast requirement.